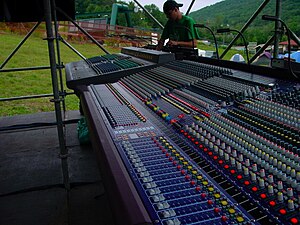 A Midas Heritage 3000 mixing console on the right at the Front of House position at an outdoor concert.

Midas consoles are currently being used around the world by audio engineers largely in the live sound realm. Applications for these boards include Front of House (FOH) and monitor console positions. Common and historical consoles include the Heritage 1000, 2000, 3000 and 4000, the venerable XL4, XL3 and XL200 & 250 large frame professional touring consoles and a variety of less expensive versions aimed at the club and regional sound market.

The first digital console from Midas, the XL8, was launched at the Frankfurt Music Messe in 2006, becoming the flagship Midas console. Notable features include three pre-amps per channel to enable Front of House, Monitor and broadcast control surfaces to be fed from the same input rack, dual redundant master control processors, and integration with the Klark Teknik Helix EQ system via the Rapide remote. In September 2008 at the annual PLASA tradeshow, Midas introduced the PRO6 Live Audio System, the second networked digital audio system from Midas. Employing technologies developed from the XL8, the PRO6 offers similar audio performance in a compact package. In 2010, the PRO3 and PRO9 digital consoles were added to the Midas product line, along with the VeniceF digital-analog hybrid ("digalog") console, which replaced the Venice analog console. At the 2011 PLASA show, Midas unveiled the PRO2 and PRO2C consoles, which bring Midas digital features from the larger PRO and XL8 consoles into a more compact package and a lower price point.[1] Midas launched the PRO1 digical console at InfoComm 2012 in Las Vegas. The PRO1 features an even smaller physical footprint and lower price point than the PRO2/PRO2C.[2] In January 2014 at Winter NAMM in Anaheim, California, MIDAS introduced their newest ultra-affordable M32 console ($4,999 MSRP in USA), based largely on hugely-successful Behringer X32 mixer, sharing most of OS but with different microphone preamps, same as in MIDAS Pro series mixers. (X32 uses slightly different preamps, also designed by MIDAS, but running at 48KHz sample rate, using Cirrus Logic A/D converters. MIDAS Pro preamps are 96KHz and use MIDAS' own 8-channel A/D converter, branded MIDAS-8000, which reportedly has better performance numbers than Cirrus Logic chips used by most other console makers).

At that same time, Midas also began retiring much of its analog console product line; including the Heritage, Legend, and Siena. The Verona analog console and VeniceF and VeniceU analog-digital hybrid versions of the original Venice console are still an active part of Midas' product line. Midas also markets the digital audio distribution components that are commonly used with their digital consoles as stand-alone digital snakes, or larger multi-site audio distribution networks.

MIDAS digital consoles are known for somewhat steep learning curve, due to very different VCA-centric workflow than most other digital desks, but reportedly are easy to use once engineer learns them. They are known for small footprint with only 8 channel faders (1 and 2c), although VCA faders can be flipped to channel faders in Extend mode. Though most other consoles with similar channel count have at least 25 faders.

Linux is used at the core of all Midas digital consoles. This is mentioned prominently in their marketing materials, as well as in their preference for Linux development and kernel programming experience in job postings for development positions. At the core of all MIDAS Pro desks is standard PC motherboard with 4Gb flash card (as OS and data storage). Linux is a flavor of UNIX operating system (on which Apple OS X and iOS are based), and is considered to be more stable and efficient than Windows-XPe based desks (DiGiCo, Soundcraft/Studer and AVID Venue series).

Midas' sister companies include Klark Teknik, famed for their graphic EQs and signal processing; EV (Electrovoice) who produce microphones, loudspeakers and electronics for the professional market; Dynacord, producers of loudspeakers, amplifiers and electronics; and DDA Consoles, who offer consoles for studio, broadcast and live use.

In December 2009, Midas and Klark Teknik were acquired by Music Group, a holding company chaired by Uli Behringer, which also owns other audio companies such as Turbosound, Behringer and Bugera as well as Electronic Manufacturing Services company Eurotec.[3][4]